In my opinion, the development cost of each feature in a product can be divided as follows:

The Basal Cost of a feature is composed of two different parts:

The Initial cost of a feature

This is the cost/expense incurred by the team during the initial development of the functionality. It includes the cost since the team starts working on the feature until the customer has it available and starts using it. Of course, this process should consist of multiple deployments and partial releases to obtain feedback and make the necessary adjustments…

The Basal Cost of a feature

After the initial development cost, we had this continuous cost that reduces the team capacity for new features development (innovation).
This cost, which continues over time and only ends with the removal of the feature or the end of life of the product, is the cost incurred by the team for the existence of that code and that feature in the product.
It is important to keep in mind that this cost does not refer to the cost of making modifications to the feature or fixing bugs, it refers to the cost of simply having the code there...

Why does this cost happen? Why is there an ongoing cost for a feature that is not evolving?

And worst of all, this overhead is continuous until the "death" of the feature, i.e., the end of life of the product, until no user uses it, or until the end of the world (whichever comes first).

Evolution of the Cost of a feature

As we saw, the Basal Cost is more or less constant during the life of the feature. But each language, dependency, or technology can reach a point that is no longer usable for whatever reason (obsolete dependencies, security problems, normal evolution that deprecate the language version we used, etc).  From this moment, the cost can skyrocket because we are forced to update it even if we don't want to evolve the feature.


So in summary, the real cost of a feature can be represented by the following graph: 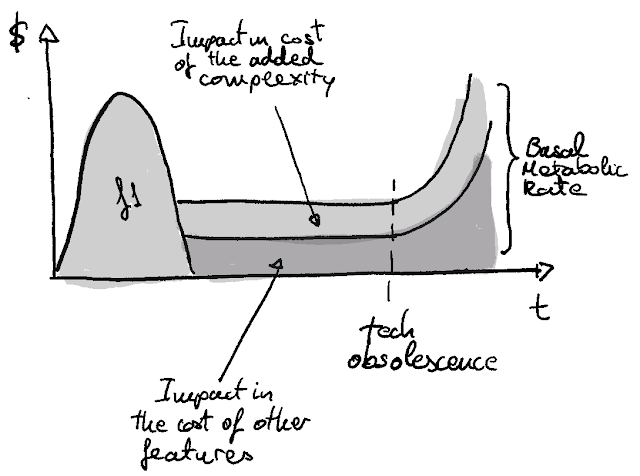 A common mistake is to neglect the Basal Cost and consider that if no changes are made to a feature, the feature's ongoing cost is zero.
I guess this comes from using metaphors from other professions such as construction that are not suitable for software development. 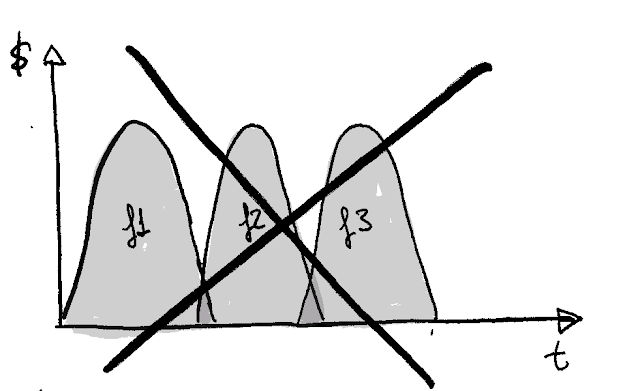 Although the capacity changes (positively or negatively) over time due to different factors (knowledge of the business, techniques, stress...), the team capacity is finite.
The accumulated Basal Cost of all the features that the teams own reduces the capacity available to develop new features (innovation).

Over time we can see how the team capacity for innovation shrinks very fast. To a point where capacity is exhausted, and the team finds itself in a situation where it is not possible to innovate and spends all its time "maintaining" the functionalities it already owns. 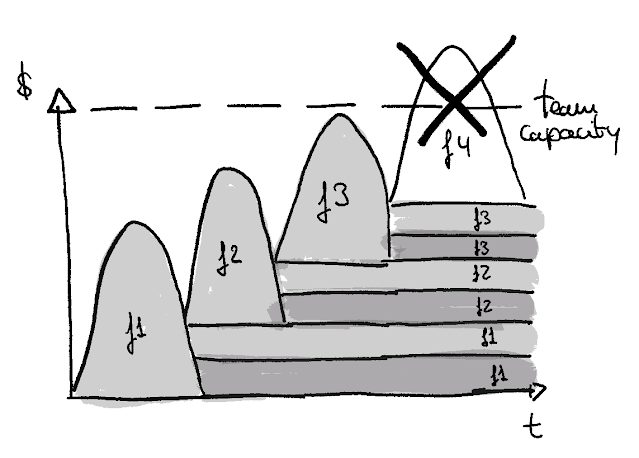 The above sections highlight several principles that we must consider to improve our product teams' efficiency.

Remember: “Simplicity --the art of maximizing the amount of work not done-- is essential.

I believe the basal cost per feature doesn't scale linearly with the number of features. For the 2nd, 3rd, 4th, Nth feature, it decreases. The infrastructure is already in place, the code and overall solution are understandable. Then I believe it goes up until it becomes unmanageable.

The choice of N depends on the essential and accidental complexity and could vary from product to product.